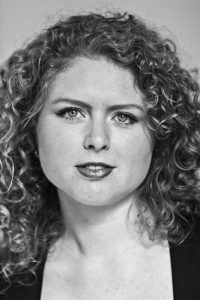 The Dutch mezzo-soprano Eline Welle started her musical education with piano lessons at the age of 6. She won various competitions and at the age of 11 she played her first piano concerto with orchestra on tour in France. Her first singing experience was as a member of the National Children’s Choir, where she had many early opportunities to sing with world-class conductors, including Ricardo Chailly, Edo de Waart, Jaap van Zweden, Bernard Haitink, sir Simon Rattle and Nicholas Harnoncourt.

In 2009 Eline was admitted for both Piano and Classical Singing at the Conservatory of Amsterdam. She studied singing with Valerie Guillorit and Sasja Hunnego, acquiring the title Master of Music in 2016. Her current teacher is Selma Harkink.

In 2014/2015 Eline took part in the International Lied Masterclass by Christianne Stotijn in Brussels. She has participated in masterclasses with Margreet Honing, Ira Siff, Emma Kirkby, Claron McFadden, Maarten Koningsberger, Udo Reinemann and Meinard Kraak, and has worked with such stage directors as Floris Visser, David Prins, Elsina Jansen and Marcin Lakomicki.

Eline performs as a soloist both in the Netherlands and abroad. She is also passionate about chamber music, ensemble singing and teaching. She is a member of the Helios Trio (Iteka Wijbenga, viola and Laurens de Man, piano) with which she performed at the Harmos Festival in Portugal and at the Concertgebouw in Amsterdam. Her oratorio experience includes solos in Bach’s St Matthew Passion, St. John Passion, Hohe Messe, and various (solo)cantatas, Mozart’s Requiem and Mass in c minor, Händel’s Messiah and Scarlatti’s Stabat Mater.

She also enjoys the opera stage. She recently performed Hänsel (Hänsel und Gretel, Humperdinck) at the Berlin Opera Academy. She took part in the Performing Opera Summer Course of the Grachtenfestival in Amsterdam where she performed scènes of Cherubino (Le Nozze di Figaro, Mozart), La Grande Duchesse (La Grande Duchesse de Gerolstein, Offenbach) en Orlofsky (Die Fledermaus, Strauss). Together with Eric Vaarzon Morel and Oene van Geel she performed parts from the Flamenco Opera El Greco. On various tours with the Dutch Symphonic Wind Orchestra she sung arias and songs by composers such as Rossini, Tchaikovsky, Mahler, Bizet, Bernstein and Offenbach. From time to time Welle winks at different genres such as the French Chanson